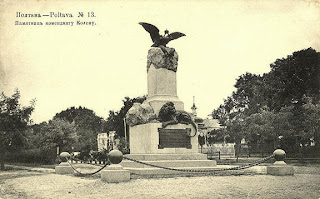 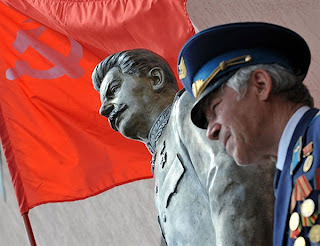 Ukraine began 2011 with a war of monuments. The most significant blow of the ‘conflict’ thus far was struck on 31st December, when a monument to Stalin in Zaporizhzhia was blown up. The monument was erected by the local Communist party on the territory of its headquarters in 2010. The bust was reportedly decapitated on 28 December, before its complete destruction on New Year’s Eve. The authorities have reacted robustly to the incident, according to Dzerkalo Tyzhnia and other Ukrainian media, arresting members of nationalist organizations throughout Ukraine. The culprits are wanted on charges of terrorism. Both organizations targeted, Svoboda (Freedom) and Tryzub (Trident) have denied any involvement in the explosion. Tryzub issued a statement in which it called the measures taken by the authorities against its activists ‘political repressions, and an attempt to suffocate the forces of Ukrainian patriotism’. The lawyer representing the Tryzub activists has claimed his clients’ were detained illegally, and their human rights abused. None of those arrested have been charged. The incident follows similar acts of vandalism carried out against a monument of Lenin in central Kyiv in 2009. The treatment of the culprits contrasts sharply with the present attitude of the authorities: the five students, whose trial took place under Yushchenko’s regime, were charged only with ‘hooliganism’ and let off relatively lightly.

The destruction of the Stalin monument has sparked off a sharp public debate over monuments to controversial figures. Activists of the nationalist organization Ukraina Soborna (United Ukraine) launched a major petition in western Ukrainian cities, appealing to the authorities to dismantle all monuments to Lenin, Stalin and others implicated in political repressions against Ukrainians. The protestors demand a halt to the ‘anti-Ukrainian policy of heroicizing the Soviet era and its leaders’. In 2007, President Yushchenko passed legislation by which all monuments to those responsible for the Holodomor should be destroyed, and all streets named after them renamed. So far this policy has not been carried through: according to Radio Svoboda there are still around 2000 monuments to Lenin in Central and Eastern regions of Ukraine. Similar sentiments were expressed by journalist Vitalii Portnikov on one of Ukraine’s most popular TV shows, ‘Shuster Live’. Portnikov called for commemoration of Stalin to be made illegal in the way that celebrating Hitler is illegal in some European countries.

The energetic reaction of the authorities to the destruction of the Stalin monument stirred memories of similar acts of vandalism in the early 1990s, this time against the figure who serves as Stalin’s nadir in terms of memorialization, Stepan Bandera. Stepan Lesiv, the director of the Bandera Museum in Staryi Uhryniv, western Ukraine (Bandera's birthplace), claims that the war of monuments was begun in 1990 by the Kremlin. Two monuments to Bandera in Staryi Uhryniv were destroyed using explosives in 1990 and 1991. In the second incident a monument to Evhen Konovalets, a major figure in the Organisation of Ukrainian Nationalists, was also destroyed. This second attack was of an extremely violent, nature: one security guard was shot and one beaten, according to Lesiv. No one was ever charged with the attacks. Lesiv told BBC Ukrainian that investigations had identified agents of the Soviet Ministry of Defence as responsible, but their names were never revealed and no action taken. In the light of the authorities’ efforts to track down those who vandalized Stalin, Ukrainian politicians have called for the investigation to be re-opened and those responsible brought to justice. Commenting on the destruction of the Stalin monument, Lesiv said that although he viewed Stalin as ‘a great executioner of the Ukrainian people’, he did not support such ‘radical methods’, saying that ‘in a lawful state such questions should be solved in a different way’.

The acceleration of the politicization of monuments saw its most recent manifestation in Poltava, where the local mayor, Oleksandr Mamai, has refused to permit the erection of a monument to Ivan Mazepa, saying that this is ‘a political question’ that should be decided by the parliament. Mazepa was a powerful Cossack Hetman who, in 1708, infamously deserted Peter the Great to side with Charles of Sweden, and was subsequently on the losing side at the battle of Poltava in 1709. The figure of Mazepa is another that causes division within Ukraine, and between Ukraine and Russia. A monument was due to be erected in 2009, after a major campaign backed by then President Yushchenko, but was blocked by the mayor at the time, Andrii Matkovskyi. The monument has, according to the website Istorychna Pravda, lain in storage since then, and has suffered damage caused by theft of its ‘bronze buttons’.

Mamai said: ‘In my opinion the mayor should look after roads, trolleybuses and feeding children in schools... As for Mazepa, I’m 100% sure this is a political question. It only artificially divides Poltavians. If the Verkhovna Rada approves the proposal, and the President signs it, then I’ll do whatever I am ordered to do.’ Mamai’s policy would seem to be not entirely consistent, however: the mayor also confirmed that the existing monument to the Defenders of Poltava, which celebrates the Russian victory overthe Swedes and Mazepa, and was erected in 1909 on the 200th anniversary of the battle, will be restored to its original appearance through the addition of a two-headed eagle – the symbol of Imperial Russia.

Mamai did not mention any political significance that this may have, instead emphasizing the contribution to Poltava of the commander of the Russian forces, Oleksiy Kelin: ‘I read about the Commander himself, and he really did a lot for the city. And the monument did actually have a two-headed eagle before.’ The Poltavan regional governor, Oleksandr Udovichenko, also saw no reason for objection to the project ‘You have to agree, all monuments to the Battle of Poltava, or about 90 percent of them, were built during the Russian Empire. If we just focus on the symbols of Imperial Russia – the two-headed eagle – then we’ll have a lot of fuss over this question. That’s not our way. The Bolsheviks took down the eagle, the Germans came and wanted to take the lion. Now, when we want to return the monument to its original state, for some reason things get emotional, people want to bring in some political , national judgements. I don’t think this is necessary.’ The imperial eagle was removed by the Bolsheviks in 1921, while other details of the monument, including a lion, were removed by the Germans during World War II, but were then restored by the Soviet authorities.

The Poltavan case reveals both the political importance and the sometimes baffling complexity of memorialization for contemporary Ukraine. The monument itself, originally imposed from outside, then vandalised, then restored, then altered again by various ideologies and authorities, yet now internalized and valued by local people, is a reflection of troubled and shifting Ukrainian memory. The discussions around this monument, and its conspicuously absent antithesis in Mazepa, also reveal much about the significance of questions of memory in contemporary Ukrainian politics. Under the present government, the mayor feels that the Mazepa question is of such political sensitivity that he prefers not to deal with it, but to pass it on to higher authorities. On the other hand, neither mayor nor regional governor sees any problem with erecting a Russian Imperial eagle. Given the highly charged nature of such a symbol, the attitude that this is nothing more than innocently restoring a site of historical significance to its original appearance is surely a disingenuous one.

The above does not only reveal the close links between memory, memorialization and politics, however. It also has some alarming implications for the immediate future. The deferral to authorities in the building of a local monument, and even more so the harsh response to the destruction of the Stalin monument, with the use of the term ‘terrorism’, show that memory practices are taken very seriously at the highest levels in Ukraine. On the other hand, the destruction of the Stalin monument shows that there are those opposed to the authorities who are also willing to take extreme action with regard to ‘undesirable’ memories. Considering both of these factors, monuments in Ukraine are beginning to look like dangerous places.

Posted by Uilleam Blacker at 2:16 PM