The Holocaust in L'viv and 'European Memory'. The two levels of Agnieszka Holland's In Darkness

Agnieszka Holland’s choice of L'viv as the setting for In Darkness (2011) raises a number of important questions about the portrayal of the Holocaust. The film, which is based on a memoir, portrays the fate of a group of Jews who are hidden and kept alive in the city’s sewers by a Pole. The Pole initially helps the Jews purely for material gain, and shows little empathy for their predicament. Yet throughout the film he begins to grow attached to his charges, eventually stopping taking payment and risking himself and his family for their sake. Some reviewers have criticized the focus on the Polish rescuer, which takes centre stage against the backdrop of the plight of the Jewish characters, much in the same way that Schindler’s List, focuses principally on a German character. 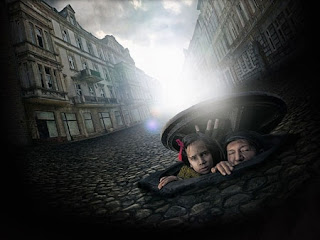 It was precisely this focus on a Pole that, understandably, dominated Polish reaction to In Darkness. The film taps into what has become the most problematic area of Holocaust memory in Poland: the exact nature of Polish role in the Holocaust – as bystander, rescuer, exploiter, denouncer. All of these roles can be observed in the film. The central character, Leopold Socha, is presented initially as an unscrupulous criminal, but progresses to show courage and empathy towards the Jews he helps. The film explores the difficult dilemmas faced by non-Jews in the Holocaust in a nuanced way, showing the fine line between decisions to help or collaborate that often depended on pragmatism, circumstance and improvisation. The character is Socha is ably played by Robert Więckiewicz, who succeeds in being by turns brutal and empathetic, and even in his seeming conversion retains a degree of ambiguity. As he gleefully celebrates saving ‘my Jews’ (a phrase he repeats several times) at the end of the film, the viewer is left wondering whether it  is human courage and kindness that are at work here, or an expression of a kind of ownership and the obsessive desire to defy the Nazis.

It is difficult not to compare In Darkness with Holland’s other famous film about the war and the Holocaust,  Europa Europa (1990). There is a stark contrast. The latter film is by turns grotesque, fantastical, funny and tragic, encapsulating the horrors of the war in a carnivalesque spirit, and underpinned by skilful and elaborate plotting and baroque, deliberately overblown aesthetics. In Darkness has more in common with a Hollywood thriller, retaining a relentless and linear tension throughout, with almost no concessions to irony and certainly not to fantasy. It retains the bleakness of canonical Holocaust films like Schindler’s List and The Pianist, but without ever getting close to their pathos. Its claustrophobic, jerky camera work and settings have more in common with the type of thriller that Holland has directed recently (The Wire; The Killing).

The scope of Europa Europa and In Darkness could not be more different. The former presented a panoramic view of the war, swooping form the Poles to the Germans to the Jews and the Soviets. It is a film that knowingly and skilfully engages with history. Crucially also, it plays with the idea of identity, as the protagonist switches effortlessly (and not always intentionally) between being a Pole, a German, a Soviet, and a Jew. In this way the film revealed the essential, horrifying absurdity at the heart of a chaotic orgy of violence. In Darkness deals with the same problem on a microcosmic scale – not just one city, not just its ghetto, but the sewers underneath it. This context is no less complex. The wartime stage of L’viv was populated by Nazis, Jews, Poles, Ukrainians and Soviets, and their interrelations were highly complex (as is the present day memory of these relations). In contrast to Europa Europa, In Darkness portrays ethnic divisions as fixed, each group fulfilling its separate role in the Holocaust drama. These groups interact in complex ways, but their identities do not overlap. One can see hints of overlap in the way the Ukrainians and Poles chat to each other in a hybrid language, or in the various cultural and linguistic affinities of the Jewish characters; but when the occupation kicks in, these ambiguities recede – it is only blood that matters.

The local nuances of the Holocaust in L’viv are not explored overtly in the film. How you understand it very much depends on how much you know. To some Poles, Ukrainians and Jews, though by no means all, the contexts and back histories of these three groups in L’viv will be familiar – at least in collective memory, if not in their historical reality. For the average viewer around the world, the film will look very much like a typical Holocaust narrative. There is little explanation of L’viv society, and the nature of its wartime experience. The complexities of this society are expressed primarily through language: everything depends on who uses and/or understands (or does not understand)  German, Yiddish, Polish, Ukrainian or local L’viv dialect. For the viewer who does not know these languages it will be hard to differentiate between Polish and Ukrainian, or the mixed Polish of L’viv. It may also be hard to distinguish between German and Yiddish. For a viewer who is unable to disentangle the linguistic complexity of the film, its setting becomes irrelevant: the city itself is shown only sporadically, and then only in carefully constructed shots that take a high vantage point so that the backdrop consists mostly of road and the lower walls of buildings. It looks like generic Eastern Europe, or even just Europe.

The decision to portray local specificity implicitly, through language must be a conscious choice. Indeed, Holland underlined in an interview that the film works on different levels – for those who know the history, and for those whose reaction will be more ‘emotional’. Thus, the film accurately reflects the context for those who are in the know, without having to laboriously explain it for those who are not. It is notable, however, that the only real concession to historical explanation comes in the first appearance of the Ukrainian character, Bortnik, an auxiliary policeman helping the Nazis. One of his first statements is that the German invasion is ‘the best thing that ever happened’ to Ukrainians. This may be intended to explain to the uninitiated who Ukrainians are. Holocaust memory is, after all, dominated by the Schindler’s List image of basically two sides, Nazis and Jews. The role of Poles is unclear enough to the outside world; the role of Ukrainians even more so. Thus, for those who read the film as a non-specific, generic depiction of the Holocaust, this quick one-liner serves to clear up the presence of this potentially confusing character.

The Ukrainian policeman is simplistically portrayed; but in the end the only really complex character in the film is the main Polish protagonist. Even the Jewish characters are somewhat two-dimensional and show little agency, at best serving to show that not all Jews were culturally, socially or politically the same. With one exception, they sit and wait passively while Socha manipulates them, goes through moral dilemmas and transformations, then performs heroics to help them. In relation to the schematic Ukrainian character, Holland commented that, ‘It is not my task to deal with Ukrainian history. I have enough with Polish, Jewish, European history.’ One cannot, perhaps, expect complexity across the board in a single film. Yet Holland’s comment speaks to a wider issue of the role of the Holocaust in European memory, the selective nature of that memory, and of the general perception (or rather non-perception) of the story of Ukrainians (and others) in World War II and in relation to the Holocaust: this is a story too obscure and too distant from the ‘European’ (Spielbergian?) story of the Holocaust to merit extensive treatment, or to be understandable or of interest to a narrowly understood ‘European’ public.

While the figure of the Ukrainian policeman remains marginal in the film, the portrayal of Ukrainians helping to round up and shoot Jews led to some negative reaction in Ukraine. The film can hardly be said to overemphasize Ukrainian participation in Nazi anti-Jewish, however, and does not portray anything that does not concur with historical fact. The Ukrainian policemen are hardly sympathetic, but they are not demonized; they are shown, like all the other characters, to be caught up in a chaotic situation in which they are trying to survive, possibly to gain advantage. There is also one Ukrainian who helps Jews towards the end of the film, though his brief appearance, which is not totally necessary to the plot, smacks slightly of tokenism. Those who do not distinguish Polish from Ukrainian will be unaware of the writers’ fairness, however, as he has no self-explanatory lines to tell the viewer his nationality.

Although it obscures some details, the dependence solely on linguistic diversity to portray local specificity nevertheless allows In Darkness to accomplish two seemingly incompatible things. First, it portrays the interaction between Poles, Jews and Ukrainians under the German occupation as nuanced, not easily reduced to hatred, exploitation and violence, while showing how these things arose and existed. It hints at pre-existing relations between the cultural groups, by which petty Polish and Ukrainian criminals look out for one another in prison, drink with one another, in which some Jews identify with Polish culture. It shows that the relationship between Jews and non-Jews was difficult, characterized by ignorance and prejudice, and yet was also not reducible to blind anti-Semitic hatred, and was characterized very often simply by ambivalence. At the same time, for its wider audience, who does not know the history, In Darkness folds all of this complexity away and, despite the rather awkwardly explained presence of the Ukrainians, presents a familiar, archetypal view of the Holocaust as consisting of the mythological triangle: the marching, inhuman Germans with their pistols, camps and dogs, the frightened and chased Jews hiding under floorboards, and finally the non-Jewish rescuer, the good Samaritan who redeems humankind. It does this with the emotional weight and thrilling drama necessary to fix the simple, but effective image in the memory of its audience. For viewers who understand the languages used, it may be worth considering whether to listen, or whether just to read the subtitles. It depends what kind of perspective one prefers - the simple, effective 'European', or the difficult, obscure 'local'. The film allows us to choose between one or the other, but makes it difficult to choose both.
Posted by Uilleam Blacker at 5:46 PM