Soviet ideology was always about the future. By contrast, today’s official Russian ideology seems to be focused squarely on the past.

Prime Minister Vladimir Putin’s recent article for the Polish newspaper Gazeta Wyborcza — written to commemorate the 60th anniversary of the Nazi invasion of Poland — expresses his determination to make 20th-century European history a major part of the Russian government’s business. That article reflects the deep, unresolved problems of Putin’s era: the inability to distinguish between the Soviet past and the Russian present; an unscrupulous mix of political conservatism and historical revisionism; and indifference, bordering on incomprehension, with regard to the key values of democracy.

In his article, Putin did not mourn the collapse of the Soviet Union. Indeed, he even praised the democratic movements that buried the Soviet Union and its sphere of influence, and he expressed no sympathy for the 20th century’s revolutions, which he called “deep wounds” that humanity inflicted on itself.

What really worries Putin is the balancing of World War II and Stalinism in Soviet history. Calling for a “contextual” and “causal” view of history, he acknowledges the Stalinist terror but interprets it as a response to the extraordinary need to defeat Nazism.

Putin summarizes his understanding of the scale of the war by recalling the loss of “27 million lives of my compatriots.” That number has grown over the years, as Soviet officials broadened the definition of wartime deaths to mean total “population loss,” rather than direct military casualties. Official estimates of Soviet deaths in World War II thus rose from 7 million (the figure put forth under Stalin) to 20 million (Khrushchev) to 26.6 million (Gorbachev), with civilian deaths accounting for at least two-thirds of Putin’s estimate.

Unfortunately, Putin does not explain whom he counts as his compatriots. If he meant those who lived within Russia’s contemporary borders, the number would have been much lower. Instead, he includes all citizens of the Soviet Union who died during the war, including millions of Ukrainians, Belarussians, and others. And, when the Soviet Union annexed the Baltic countries, Königsberg, parts of Poland, Finland, Moldova, and Japan, their citizens, too, became Soviet compatriots.

Moreover, because Putin’s “contextual” history subordinates Soviet-era suffering to the purpose of fighting the Great Patriotic War, his number mixes those who died in battle fighting for the Soviet Union with those whom the Soviets killed through mass murder, deportation, and forced labor. By this logic, one could also reclassify the victims of the terror, collectivization, and famine of the 1930s in order to boost the number of Hitler’s casualties in the Soviet Union.

Putin connects two events that triggered World War II, the Munich Agreement of 1938 and the Molotov–Ribbentrop Pact of 1939, in one causal construction. Both acts of collusion with Nazi Germany were immoral mistakes, writes Putin, but the latter was merely a response to the former. To be sure, Britain’s Neville Chamberlain and France’s Edouard Daladier signed a shameful treaty with Hitler and Mussolini in Munich. But when Hitler breached the treaty, both Chamberlain and Daladier lost popular support, and, by the start of World War II, neither was still in office. The dictators remained, however, Molotov and Stalin among them.

Moreover, while the Munich Agreement cynically blessed Hitler’s dismemberment of Czechoslovakia, it was a public document that meant what it said. But the truly important part of the Molotov-Ribbentrop Pact was its Secret Protocols, which divided Europe into two imperial domains, Stalin’s and Hitler’s, without the consent — or even the knowledge — of the nations consigned to them. Molotov, who remained in power throughout the war and until 1956, denied the existence of the Secret Protocols until his death 30 years later. Democracies make shameful mistakes, but they eventually correct them, or at least apologize for them. And they dethrone those who got them into trouble.

It is wrong, and even immoral, to equate democratic and dictatorial practices. But this is the new Russian equation.

Cover image from Peter Andrews, Reuters.
Posted by R E Finnin at 12:34 AM No comments: 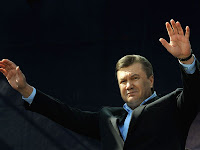 During a visit today to the Donets'k oblast, Ukrainian presidential candidate Viktor Yanukovych proposed to erect a monument to the World War II "Liberator" (Визволитель) on the border of Ukraine, Russia, and Belarus. According to Ukrains'ka pravda, the leader of the Party of Regions said, "We know who brought freedom and peace to our land," adding in Kremlin-friendly language that he was against attempts to "rewrite history."
Posted by R E Finnin at 2:17 AM No comments: 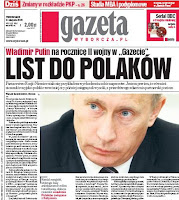 A strong majority of Poles wanted Prime Minister Putin to apologise yesterday for the 17 September 1939 Soviet invasion of eastern Poland. He made no such apology, but offered a conciliatory hand to Polish readers (and the back of his hand to Ukrainian President Viktor Yushchenko) in letter published yesterday in Gazeta Wyborcza. (The letter has been made available in English translation on Putin's website.) Here is the reaction of former Polish PM Jarosław Kaczyński this afternoon, referring to Putin as "prezydent":

First of all, there was no apology... Putin spun a story that was suitable for [Russian] nationalism. Stalin's Russia was presented as a normal state. There were some nice sentiments for Poland, but they were not enough.

Kaczyński went on to ask why Putin had been invited to Gdańsk in the first place.
Posted by R E Finnin at 5:34 PM No comments:

Majority of Poles: 'Putin should apologise' for 1939

Together with other European leaders, the Polish, Russian, and Ukrainian Prime Ministers are meeting in Gdańsk today to commemorate the 70th anniversary of World War II. Vladimir Putin's visit in particular is making headlines. According to a recent poll conducted by GfK Polonia for the newspaper Rzeczpospolita (The Republic),

As to the question, 'Should Vladimir Putin apologise for the Soviet invasion of Poland on 17 September 1939 during the 1 September commemoration ceremonies,' 76% of respondents said 'Yes.' 18% of the polled were of the opposite view. 6% did not have an opinion on the matter.

Photo from Rzeczpospolita's website. A good article on the memory politics wrought by the 1939 invasion in Poland appeared in yesterday's Financial Times.
Posted by R E Finnin at 12:21 PM No comments: