The scenes of racist and anti-Semitic behaviour among Polish and Ukrainian football fans shown in the BBC’s recent Panorama programme speak for themselves. There is little about these images that could be ‘manipulated’, as some Polish commentators have suggested, to make these supporters look worse than they are. There is a serious problem. But does it merit Sol Campbell’s warning to stay away, or risk ‘coming home in a coffin’? Luke Harding’s damning article on Ukraine certainly seems to concur with Campbell. Harding was right to point to the mess that Ukraine is in; but his analysis lumped several separate problems together, not all of which represent a threat to travelling fans: Merkel’s boycott, for one, is nothing to do with racism, but with political freedom, while the Femen group’s naked protests are, while perhaps self-defeating, raising very legitimate fears about sex tourism (though Harding’s warning’s may help to ease this problem if fans from Western Europe stay away). 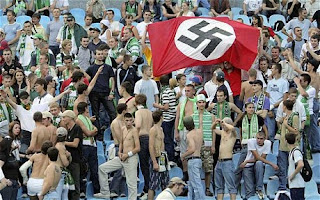 Before we start cancelling our tickets, it is worth remembering that racism and anti-Semitism in football are Europe-wide phenomena. Louis Saha recently singled out Italy and Spain on Newsnight as particularly unpleasant places to play in. In the UK, West Ham fans are notorious for making gas-hissing noises at matches with Tottenham Hotspur (like Cracovia, one of the teams featured in Panorama, supposedly a ‘Jewish team’). What the scenes in Panorama show is what happens when bigoted fans are allowed to express their hatred uninhibited by police, football authorities or government. One can imagine what would happen were the English Defence League allowed to purchase black tickets for football matches and behave as they pleased. In this regard, the report was a shocking indictment of the bodies responsible for football in Poland and Ukraine, of their complacency and incompetence.

Was Panorama an indictment of Polish and Ukrainian societies at large? Many in the West have been rightly alarmed by the rise of right-wing politics in Ukraine, where the right-wing Svoboda, or ‘Freedom’ Party, has become a clownish centre of attention, and won seats in local authorities. Yet while Svoboda’s rise should be a cause for concern, as yet it has no MPs in the national parliament. Recent Greek or French election results show a more alarming swing to the right than current Ukrainian or Polish politics. With regard to Poland, polls by the Anti-Defamation League in ten EU countries do show high levels of anti-Semitism in Poland, but even higher levels some Western European countries, particularly in Spain. Poland doesn’t look good in these polls, but it also doesn’t appear unique.

A more concerning problem in Poland and Ukraine is less spectacular than what Panorama showed: casual racism, anti-Semitism, sexism and homophobia are an accepted element of daily life, and are far more visible than they are in the West. There is little or no stigma attached to such behaviour. In countries that have spent the last two decades struggling with the social, political and economic chaos that was the legacy of communism, enforcing political correctness has been some way down the agenda.

Poland, in its efforts to be accepted into the EU, and aided by EU funding, has made positive steps in this regard, and attitudes are changing. Racism, homophobia and sexism are moving towards the taboo status they have in the West. Ukraine, which has been abandoned by the EU, left to languish in the no-man’s-land between Europe and Russia, has no such incentive, and recent governments have been more concerned with illicit gas deals than promoting tolerance in society.

In this situation, Ukraine’s very existence seems precarious. Faced with the threat of the return of Russian dominance, a corrupt, criminal government that speaks Russian and seems intent on denigrating Ukrainian language and culture, many Ukrainians feel that their very identity is under threat. The result, as Michael Goldfarb noted recently in his more nuanced article in the Guardian, is fear, which breeds xenophobia. This is expressed by football hooligans by giving a Nazi salute, and by politicians by fighting in parliament. In the light of this, it is all the more admirable that many young Ukrainians do nevertheless share open and tolerant ‘European’ values. In the West, these attitudes are drummed into young people. Even if you don’t like them, you have to pay them lip service. In Ukraine, you have to develop them for yourself.

Panorama also threw together two related but different phenomena: racism and anti-Semitism, and in this regard missed an important part of the context for what it showed. Racism in Eastern Europe is a relatively recent problem. It speaks of general xenophobia against all that is different, as well as a lack of experience of contact with those of other races. Anti-Semitism has a far longer history and is something more deeply ingrained in Eastern Europe. Jews lived on the territories of today’s Poland and Ukraine for centuries, largely because they were unwelcome elsewhere. When Western Europe was expelling its Jews, the Polish-Lithuanian Commonwealth welcomed them. Poles, Ukrainians, Jews and others managed to co-exist on these territories for centuries, and Jewish culture managed to flourish. As well as tolerance, centuries of proximity bred tension, which at times spilled over into violence. The image of the Jew as the other became entrenched for peoples across Eastern Europe.

Today, the centuries of co-existence are eclipsed by images of the gas chambers. Poland and Ukraine have become synonymous for many in the West with Nazi terror, so much so that even the President of the United States erroneously used the term ‘Polish Death Camp’ while awarding a medal to a Polish WWII veteran. Poles and Ukrainians are often remembered in the West as having stood by and watched the Holocaust, or actively assisted in it. Poles and Ukrainians prefer to highlight assistance given by them to Jews, and to point at their own horrific suffering. Debates over the Holocaust, and anti-Semitism among Poles and Jews, rage unabated to this day with a bitterness that can seem strange to Westerners, whose memories of the war stagnated long ago.

After the Holocaust, there were few Jews left in Poland and Ukraine, and many of those that remained trickled out in later waves of emigration. Why then, should anti-Semitism persist? There are numerous justifications for it: Jews retain a vastly disproportionate influence in politics, in business and the media; they also played a disproportionately large role in imposing communism. These are narratives that are based only tangentially in reality, and largely in myth. They speak of something deeper: the image of the Jew as other has been with Poles and Ukrainians for centuries, and cannot be erased in a few decades of absence.

Contemporary manifestations of anti-Semitism also, however, have the added element of responding to that absence. Poles and Ukrainian experienced the war and the Holocaust in a first hand way that it is hard to imagine in the UK. A large part of their collective trauma was in fact seeing what happened to their neighbours, and dealing with their own guilt at not having stopped it. These are not easy things to deal with, and the response is often resentment and denial. At its extremes, this manifests itself in the grotesque forms of anti-Semitism seen on the Polish and Ukrainian football terraces. This is not hatred of actual people; it is a hatred and fear of the ghosts that continue to haunt society and its conscience. 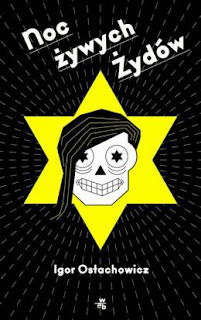 In this respect, it is no coincidence that one of the most talked about recent novels in Poland, Night of the Living Jews, depicts a Warsaw overrun by Jewish zombies. The sympathies of the author, Igor Ostachowicz, are, clearly with the zombies, who turn out to be quite normal, and more interested in shopping than eating Poles. With the help of sympathetic locals, the zombies succeed in defeating a band of neo-Nazi hooligans who are intent on exterminating them. Ostachowicz pulls no punches in portraying Polish neo-Nazis, yet he also shows that for every thug willing to spit on a Jewish grave, or taunt a black footballer, there is a student, writer, or just normal person who sympathises with the Jewish past, and, for that matter, who welcomes people of various colours and creeds.

Had it had an extra half hour, Panorama might have spoken to people like Ostachowicz, and investigated the efforts being made to embrace Poland and Ukraine’s Jewish past, and build tolerance. Every major city in Poland holds its own annual Jewish cultural festival. Krakow’s is the largest of its kind in the world. The major new Museum of Polish Jews in Warsaw will be completed early next year. Far more Poles will attend the festivals and museums than would take part in anti-Semitic chanting at football matches. In connection with the Euros, the Ukrainian government launched a year of festivities to celebrate the Jewish-Polish writer Bruno Schulz, shot by the Nazis in 1942, and whose hometown now lies in Ukraine. A festival in his name will take place in September. Sadly, Ukraine has neither the funds nor political will to initiate major projects like the Polish Museum, but it is not difficult to find encouraging, grass-roots local initiatives, such as those run by the Centre for Urban History in Lviv, or the Jewish Cultural Centre in Dnipropetrovsk. Such initiatives pass almost entirely under the radar of Western commentators.

Fans who cancel their trips to the Euros because of the scenes shown in Panorama would be giving the xenophobes what they want: an insular, isolated Poland/Ukraine. A successful Euro 2012 may well be the shove that Poles and Ukrainians need to realise that these hooligans are an embarrassment to them, and that it is not enough to simply ignore them. The real problem in these countries is not the extreme minority, but the majority who passively accept the monkey noises and the swastikas. It is ultimately the responsibility of ordinary Poles and Ukrainians to stand up and condemn racism and anti-Semitism. Branding them all as racist and cancelling our tickets will not help them do this.
Posted by Uilleam Blacker at 1:26 PM